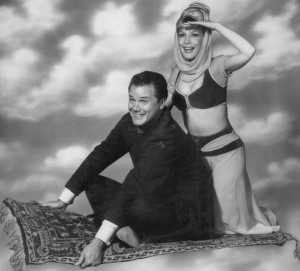 Ashton Kutcher and Mila Kunis are today’s most exciting celebrity couple, and they may just have another sitcom legend to thank for their budding romance.

Clarinda Eif-Fern, the real life inspiration for the classic ’60s TV show I Dream of Jeannie was a huge Kunis-Kutcher fan from the day she first saw them on That 70s Show.  According to Eif-Fern:

The chemistry between the duo was so palpable that it practically sparkled off the screen.  I hadn’t seen that much public sizzle between two people in Hollywood since Sonny & Cher.

But, that was back in 1998, and the couple had separate away-from-TV land romances with Kelso marrying Demi Moore and Jackie settling into a long term relationship with Macaulay Culkin.  Even then the Jeannie believed that it was only a matter of time before the couple got together; with Clarinda saying “One thing you learn after 2000 years on this planet is patience.”

That patience bore fruit on a sunny spring day in 2012.  Eif-Fern was brunching in Brooklyn’s DUMBO district with Barbara Eden, the actress who portrayed her on Jeannie, when she spotted Ashton and Mila cross the street in front of the restaurant.  It seemed to be a meeting between two friends who enjoyed each other’s company but were too comfortable with their friendship to take it to the next step.

So the Jeannie worked her magic, casting a Cupid spell on the couple to help their relationship along.  According to Wizardry Expert Miqqal Mystical, Cupid is a spell that only works on couples with already strong emotional connections who just need a tiny push to get them through that last step.

That push seems to have done the trick with the pair now engaged to be married and expecting a child.  The couple even revisited their roots with Kunis guest starring on her fiance’s hit show Two and a Half Men.  And nobody could be happier for Ashton and Mila than the matchmaking Jeannie who finally gets to celebrate the real life relationship she, and the rest of us, have been waiting for.