Dog and Goat are Friends 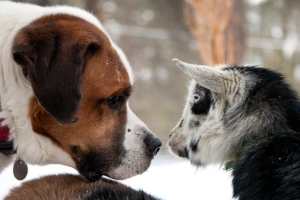 Photo of Hannah and Neil Young courtesy of Chloe Pet Photography. This pair is happy to show their affection for each other.

A California researcher has uncovered a secret love felt by a goat for a mixed-breed terrier, a revelation that has changed the lives of both creatures and caused a stir in their local community.

Dr Paul Zak, a Professor of Economics at Claremont Graduate University, and the author of the acclaimed book, The Moral Molecule, has discovered that animals release oxytocin, a hormone described as the “neurochemical of love,” when playing with others.

Zak made this breakthrough at an Arkansas animal refuge after observing a dog and goat hanging out together.  He found that after their play date, the dog showed a 48 percent increase in oxytocin, proving that he “was quite attached to the goat,” and implying that “the dog viewed the goat as a ‘friend.'”   The goat had an even more marked hormonal increase, showing an astonishing 210% increase in oxytocin.

we essentially found that the goat might have been in love with the dog. The only time I have seen such a surge in oxytocin in humans is when someone sees their loved one, is romantically attracted to someone, or is shown an enormous kindness.

Photo by: Marc St Gil for the EPA, available at National Archives

While Zak’s paper has been the source of interest in the scientific and academic communities, his work has been the central topic of discussion at the animal refuge on which Branken the goat and Wilie the dog reside.  Some on the farm view the relationship as a heartwarming tale that shows the possibility of harmony among all creatures.  Others disagree, including an old hen named Gretta who says that:

I’m from the old fashioned generation where a goat’s a goat and a dog’s a dog. It all starts out innocent enough at first, but before you know it the whole world gets turned upside down.

Such rumblings seem to have affected the relationship between Branken & Wilie.  According to a mutual friend, the pair hasnt been seen spending as much time together, and they are both trying to keep a low profile.

While the terrier has now stopped giving interviews about the situation, he was overheard saying that his friendship with Branken “just wasn’t worth the hassle.”

According to the goat, the whole situation has been overblown.  Branken is currently expecting a kid with his doe Scharma, and Zak’s paper has strained his relationship with her as she has become suspicious and jealous.  Branken adds that Zak misconstrued his true feelings for the terrier stating:

Sure Wilie and I were friends and I liked playing with him, but that was it.  I mean if that Doctor has taken my hormones after I finished playing with an old Campbell’s soup can behind the barn, he probably would have concluded that I was in love with it.  He just doesnt understand my emotions.  At the end of the day he discovered what anyone who knows me could have told him, that I just happen to be a really emotional goat.

Although they are now in the spotlight, Branken and Wilie are not the first dog and goat to have developed a relationship.  According to Carly Rixham, her St. Bernard named Hannah became instant best friends with Neil Young, a Nigerian Dwarf wether.  After a short but intense bonding period in which they shared a bed, Hannah was moved into the house, while Neil Young was kept separately in a pen with another Nigerian Dwarf goat named Pocahontas.  According to Rixham:

Hannah was totally bummed that she wasn’t Neil’s companion anymore. When I let her out, she would run straight to the pen to see her buddy. She was regularly found whimpering and whining outside of their pen. The goats were a little skittish of her but she just wanted to be friends.

While Neil Young, Pocahontas and Hannah have since passed on, we have it on good authority that they have been reunited in a place with no walls, “grazing greener pastures in the sky.”