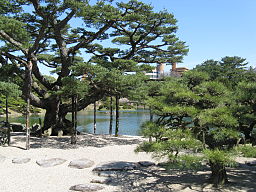 A Japanese Pine similar to the one habited by Miku; Photo by Manmaru GFDL (http://www.gnu.org/copyleft/fdl.html)%5D, via Wikimedia Commons

Aochi Yamanaga and Lito Taykmachi have waited over 200 years to find out which of them would marry the lovely Miku Rastana, and now that the traditional marriage staff of their ancient tribe has washed up on a beach in the State of Washington, their long wait has ended.

The 2011 Tohoku earthquake and tsunami off the coast of Japan caused widespread death and destruction, devastating communities along that nation’s coastline.  One of the hardest hit cities was Ishinomaki in Miyagi prefecture, the ancestral home of the Spritiyama, a small but vibrant tribe of field elves, who have lived in the area for millennia.  Happily, the tribe was prepared for the effects of the 33 foot waves, having installed countermeasures after one of their elders survived a similar tragedy which struck the Osaka clan in 1707.

Lito, Aochi and Miku were adolescent elves when they arrived at their mating ceremony in April 1803, and none of them could have believed that the event would be so extended.  Miku’s other suitors had been turned away in ceremonial contests throughout the winter, and the two remaining contenders were presented with the Staff of Initiyo.  Miku climbed into the staff’s hollowed out center while Lito and Aochi grabbed the two sharpened ends.  The gentlelves heaved the staff through the air, knowing that whosoever’s end stuck in the ground would be awarded the hand of the ravishing maidelf.  Unfortunately, the toss was a bit off course, and the staff landed in the branches of a nearby pine tree.

According to Elvish code, the mating ceremony could not end until the staff touched Earth, and so all three participants were officially engaged, but could not wed from that time forward.  Legal opinions were consulted from the best minds in the land, but none could find a loophole to free Miku from the staff, or Lito and Aochi from their vows.

Dutifully, Aochi and Lito visited Miku frequently throughout her entrapment bringing her favorite dishes of Rose Hips coated with eggplant pollen and fermented melon juice.  Originally, they had hoped that a human child would dislodge the staff climbing the tree, but Miku’s many elvish visitors changed the tree’s Qi to the extent that children sensed something magical around the area, and avoided the pine.

All this changed on March 11.  As the waves dislodged the staff Miku had called home for centuries, the still-beautiful elf felt both fear and elation.  Looking back on that moment Miku says “I knew that I wanted to build a family and begin my life with my mate, but I had grown so attached to both Lito and Aochi, that I didnt want to lose whoever’s end pointed skyward.”

For the two gentlelves, the anxiety was worse.  According to Aochi, he and Lito flew to the tree moments after the water receded to find their love gone.  After searching for weeks, they both assumed that neither would win the prize they had waited for so long.  Said Lito: “We thought that the ocean had claimed her for its own, and she would float on water, parallel to the ground for all eternity.”

Their worst fears were not to be.  The Intiyo Staff struck ground on Shi Shi Beach in Olympic National Park last Thursday, with Lito’s end staking the ground.  The Binding of Lights will take place on Tuesday in Ishinomaki.  Aochi has agreed to serve as Best Elf.

Depicting of winged beings on a beach by Tiepolo c 1762