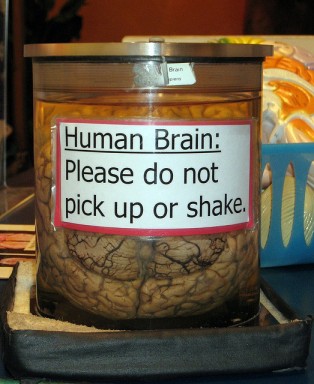 Brain housed at the Denver Museum of Nature and Science. Photo by Hatchibombotar (under Creative Commons License via Flikr)

In a first for medical science, surgeons at an American research hospital have successfully transplanted an imagination into a person who had previously been lacking this critical human function.

Patient X, whose name has been withheld due to privacy concerns, had been on the imagination transplant list for 15 years. He was diagnosed as lacking an imagination at the age of 5, after his parents detected his inability to comprehend how Frog and Toad could ever be friends, or why anyone would ever make a hat fit for a cat.

The successful transplant was based on primary research done by Alex Schlegel, a graduate student in the Department of Psychological and Brain Sciences at Dartmouth.

In a study titled “Network structure and dynamics of the mental workspace” published in Proceedings of the National Academy of Sciences, Schlegel and his fellow scientists identified a neural network coordinating between different areas of the brain to form creative imagination. The researchers used brain imaging fMRI to highlight the cranial structures involved.

Christopher Berger, a Senior Author on the study explained the importance of the findings by stating the research shows that:

The medical breakthrough was great news for Patient X. His doctors have confirmed that he is recovering well, and enjoying his newfound imagination. Medical tests show that he is now able to visualize imaginary forms such as a bee with the head of a sparrow, or a bear with fins.

The biggest test however, came when his daughters aged 3 and 5 asked their dad to tell them a bedtime story the night after he returned from the hospital. The story was such a success that story time has quickly become the most enjoyable part of the day in Patient X’s household. And that is a greater achievement than anyone could have ever imagined.