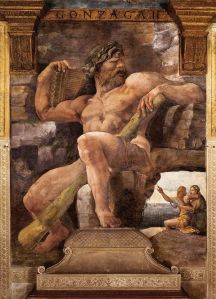 Representation of Cyclops in the Palazzo del Te by Giulio Romano

A construction crew of Cyclops has helped Italian engineers wrest the Costa Concordia off the reef on which it capsized.

The salvage operation of the cruise liner which sank January 12, 2012 in calm seas is now acknowledged to be the costliest ship raise in history, with $800 million already spent on a project estimated to have $300 million more in work to do.

According to Franco Porcellacchia, leader of the Costa technical team, the “ship is reacting very well because it’s rotating in a uniform fashion, which is what we expected but it’s a pleasure to see it confirmed.”

Franco Gabrielli, the government official supervising the operation reported on the technical progress saying, “we’re in the final phase of rotation… we have passed the 24 degree mark and now are filling the tanks with water.”

The Concordia was carrying in excess of 4,000 people went it went under the Tyrrhenian Sea.   Thirty two people perished, and a pair of bodies are still thought to be under the wreck.  Luciano Castro, a journalist who was on the ship the day it sank expressed his hope that “after this finally they will have a grave [their families] can cry over”

Integral to the operation was a team of Cyclops, working under the corporate name One Eye Demolition.  The strength, stamina and deep understanding of the physical properties of matter make up for the creatures’ lack of depth perception; enabling them to form an elite construction crew that is typically hired for extremely dangerous, high profile jobs.

Although Cyclops-Human interactions have historically been non-cooperative, the past century has seen many instances of the races forming a productive business relationship.  Cyclops teams have been hired for such diverse projects as the construction of the Burj Khalifa in Kuala Lumpur, the renovation of the Louvre in Paris, and the Big Dig in Boston.

Cyclops however prefer to work close to their home islands in the Ionian Sea, and the Concordia parbuckling offered just such an opportunity.  According to a crew member who asked that her name not be used, the global economic slowdown hurt Cyclops communities especially hard since close to 100% of their economy is tied to construction.

Explaining that she was appalled by the loss of life in the sinking of the cruise liner, the Cyclops added that she knew that she would be involved in its uplifting, because “that’s just what we do.”